A big well done to Matt Lee who successfully defended his title in the Ken Baptist memorial tournament and has now notched up 7 wins in this superb event.

The competition was greatly supported with 32 players competing and Dek Binnington and Matt Lee contesting the final. Matt, came out on top, making a 72 break on his way to  winning an excellent final 2-1 – the only frame he dropped throughout the event.

It was the seventh year in a row that Matt had triumphed in the event, and he also won the highest break prize with an excellent run of 88. 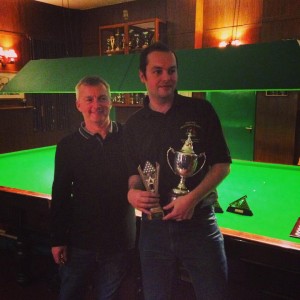 A cracking day was enjoyed by all those taking part, along with the many who just dropped in for a pint and took in some of the action.

The usual suspects were last spotted working their way through the menu at an indian restaurant in the south of the City….

All in all, a truly great day, in memory of  a great man.

No Replies to "7 Heaven for Matt Lee"

Any cookies that may not be particularly necessary for the website to function and is used specifically to collect user personal data via analytics, ads, other embedded contents are termed as non-necessary cookies. It is mandatory to procure user consent prior to running these cookies on your website.